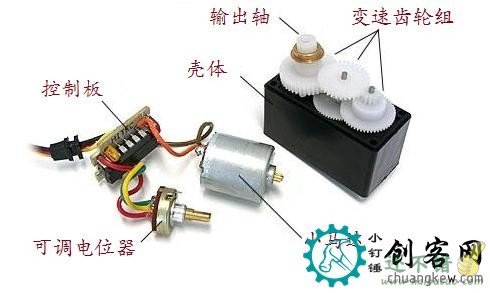 What is a servo?
The steering gear is a powerful component that can move to a specified angle.

Application of steering gear:
The steering gear has been used for a long time. It is small in size and has great effect. It is mainly used for angle control. It is usually used in aircraft models, smart cars, and robots. It also has applications in industry, such as the pitch of ships and missiles. , Yaw, and roll motions are all completed by the cooperation of the steering gear. The steering gear has applications in many projects, not limited to industrial control such as ships, online manufacturing, and pharmaceuticals. The servo circuit is built in the motor unit and has a positionable shaft, usually equipped with a gear, to control the motor with an electric signal, which determines the amount of movement of the shaft.

The steering gear is used in radio-controlled aircraft to locate control surfaces such as elevators, rudders, walking robots or operating fixtures. The steering gear is small in size, with built-in control circuit and moderate in size. In food service and medicine, these tools are designed to be used in harsher environments, and the possibility of corrosion is high due to repeated washing under high pressure and high temperature to maintain strict hygiene standards. Servo systems are also used in online manufacturing, where highly repetitive but precise work is required.

Principle of steering gear control?
The steering gear is controlled by sending electric pulses of variable width or pulse width modulation (PWM) through the control line. There are minimum pulse, maximum pulse and repetition rate. The steering gear can usually only be rotated 90° in any direction, a total of 180°. The neutral position of the motor is defined as the position where the servo has the same potential rotation amount in the clockwise or counterclockwise direction. The PWM sent to the motor determines the position of the shaft and is based on the duration of the pulse sent through the control line; the rotor will turn to the desired position. The servo wants to see a pulse every 20 milliseconds (ms), and the length of the pulse will determine the distance the motor turns. For example, a 1.5ms pulse will turn the motor to the 90° position. If it is shorter than 1.5ms, move it counterclockwise to the 0° position. Any position longer than 1.5ms will cause the rudder mechanism to rotate clockwise to the 180° position.

Type of steering gear
Commonly used steering gears sg90, mg90s, mg996 have the same control method, but the power angle of the size is different.

We are Maker, we like DIY. we provide cheap DIY parts to the world.